Top Posts
Durban beaches still contaminated with sewage
Nearly 30 000 Educators are Unemployed Despite the...
‘Hands off Ramaphosa’: Supporters rally around the president...
The Palestinian World Cup
Illegal dumping a serious issue that will be...
Israel Launches an Overnight Airstrike on the Gaza...
Unemployment is the Root of All Evil
‘Fine dining with soul’: Siba Mtongana’s journey
Ramaphosa to launch legal challenge against Phala Phala...
President Abbas bestows grand order on Naledi Pandor
Home News ‘Muslims Are Seen As A Threat To European Culture’ – Dr. Tariq Ramadan On French ‘Anti-Separatism’ Bill
NewsUncategorizedWorld

‘Muslims Are Seen As A Threat To European Culture’ – Dr. Tariq Ramadan On French ‘Anti-Separatism’ Bill 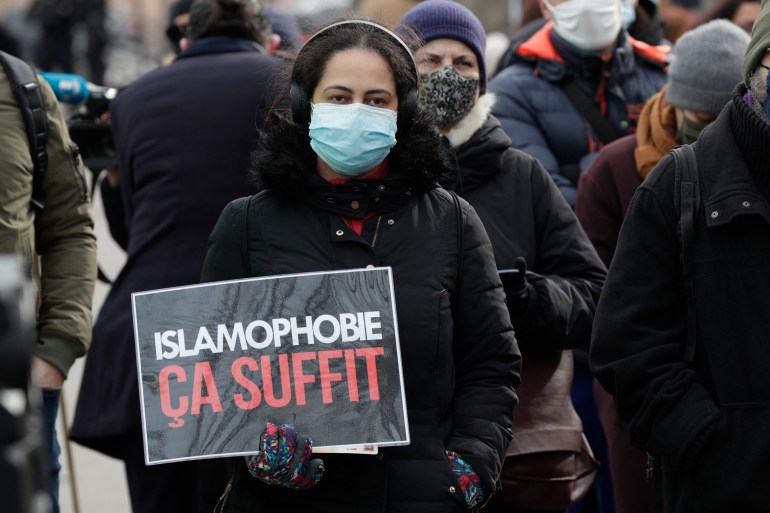 A woman holds a placard reading ‘enough of Islamophobia’ as protesters demonstrate against the ‘anti-separatism’ bill, in Paris on February 14, 2021 [Geoffroy Van Der Hasselt/AFP]

While President Emmanuel Macron’s government says the ‘anti-separatist’ bill aims to eradicate extremism, critics have argued that the controversial bill seems to pander right-wing voters, who see Islam as a threat to European culture. This, they say, is as a desperate attempt by Macron to regain lost political ground since his election.

Dr. Tariq Ramadan, a Swiss academic and expert on Islamophobia, believes the bill comes in the context of attempts to present Islam as a threat to European society. “The the way France is dealing with Muslims is to present it (Islam) as a threat because they (Muslims) are not integrating. It’s as if Islam per se is against the European cultures.”

According to the Special Eurobarometer 493, the Muslim population in France is estimated to be 3.3 million or 5% of the nation’s total population. Some estimates suggest this figure may be higher as France prohibits the identification of individuals by religion. Pew Research Center predicts the Muslim population would reach 8.6 million or 12.7% of the country by 2050. This makes the Muslim community in France the largest in Europe and one of the most significant in the West.

Other experts, such as Professor Enes Bayrakli from the Foundation for Political, Economic and Social Research (SETA), have also pointed out that, in recent years, President Macron’s sentiment has been influenced by the far-right ideology.

Dr. Ramadan said: “The far right now are maybe not in charge in many European countries but their discourse and their ideology is everywhere and it’s creating the new enemy from within the Muslims. Muslims could be French Muslim citizens but at the end of the day they are much more Muslim than French. The perception is you might have the French passport (and) you might have the European passport but at the end of the day you are much more Muslim than a citizen so you are perceived as a foreigner.”

Just over a week ago, protestors took to the streets in the capital Paris and other cities including Marseille, Lille, Strasbourg, Bordeaux and Lyon to denounce Islamophobia. Omar Slaouti, the organiser of the demonstration, told Anadolu Agency (AA): “The French government has targeted Muslims, even Islam, and is interfering with Islamic practices. This is too much. We condemn the (government’s) colonialist and neo-colonial approach.”

Slaouti said the protests will continue against the so-called “separatism” bill: “He (President Macron) wants this system to be more unequal. We condemn his liberal and racist policies that deepen the inequalities.”

OPINION: Mozambique: A Nation In Strife

16 Days of Activism comes against the backdrop...