Top Posts
City of Jo’burg to elect new mayor –...
Tips on how to survive a heatwave
Questions Arise on South Africa’s Neutrality on the...
DA march to Luthuli House as a last...
What you need to know about getting off...
EFF, smaller parties to back Al Jama-ah in...
‘Private sector ready to fix energy crisis’- AfriForum
Russia and China to Engage in Joint Naval...
Ramaphosa needs to get cabinet reshuffle right
The Maraisburg Boys Orphanage needs your help
Home PodcastJulie Alli Leicester Muslim-Hindu clashes due to Hindutva ideology
Julie AlliPodcast 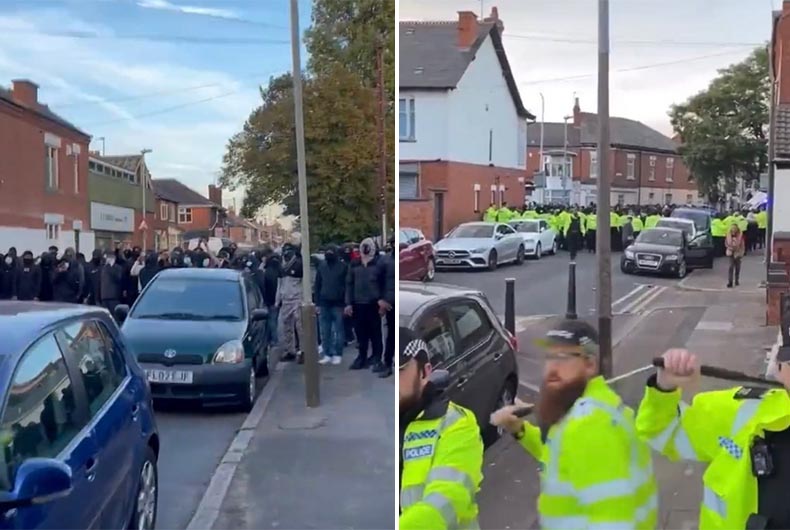 Leicester – A large number of police officers have been redeployed to the midlands in Leicester following clashes that took place between Muslims and Hindus over the weekend. According to media reports, trouble started after the August 28 India-Pakistan cricket match. These tensions were then further escalated over the weekend.

Tension over the cricket match is nothing new but it has never sparked such violence that was experienced over the weekend. Muslims and Hindus have lived side by side peacefully in Leicester for many years. According to Massoud Shadjareh, Islamic Human Rights Commission based in UK, this change in relationship is because of the Hindutva.

“We had no issue between the Hindu community and the Muslims. Indeed, in many ways we are a target of the same racism and so that sort of bonded us in some ways together. In recent years we are seeing a change in this relationship and that is because of the Hindutva ideology which has been sort of promoted and being implemented not just in Britain but from India.”

What happened in Leicester has been happening for quite a few months. Mobs have been attacking Muslim youth and clashes have been occurring. However, Muslims have not been targeted like this before. Shadjareh has evidence that points to these clashes being orchestrated by Hindus who don’t reside in the city.

“We have now got evidence of buses being mobilised from London, from Brent. From the temples [there] and these buses are registered to the temples and the same buses were filled up with youth from London and brought down to Leicester to get involved in this activity. The buses return and there are videos available of the same buses returning to the temple in Brent. This has been organised through the temples. The evidence is very clear. This is not a bad relationship between two communities. This is being coordinated and organised.”

SMread: Navigating through tough times as a Muslim

Restoring the peace and keeping it

For years there has always been peace within the community. The incident that occurred during the weekend is so uncommon that it even shocked the mayor of Leicester. For peace to be restored, the Hindutva ideology needs to stop being spread, said Shadjareh.

“I think as long as the ideology of Hindutva is being promoted systematically within the temples and the Hindi community in Britain or elsewhere, we’re going to see the matter becoming worse. We are seeing the unleashing of this ugly ideology in India and what it is creating and promoting. It’s not a misunderstanding that you could resolve by dialogue between the community leaders. This has been bubbling away and being sort of instigated and for a very long time.”

What is happening in Leicester is occurring in other parts of the world but on a much smaller scale. Shadjareh has documented similar incidents occurring in the United States. It is his belief that if awareness is not created soon, these attacks could escalate into something far more dangerous.

The reason Muslims are facing such great injustice

Around the world Muslims continue to face great injustice. In the 21st century such injustices should not be occurring. Shadjareh agrees this is a huge challenge the Muslim community currently faces but we are equipped to deal with these injustices.

“The think is we are failing because overall our leadership is actually abandoning our responsibility to follow the Deen as we should and we are becoming involved in politics … We actually think by rubbing shoulders with politicians and those people in authority we could safeguard our interests … We need to stand up for justice and we need to resist injustice. No matter where it comes from.”

[OPINION] How should S. Africans view the monarchy?

Questions Arise on South Africa’s Neutrality on the...

DA march to Luthuli House as a last...

What you need to know about getting off...

Russia and China to Engage in Joint Naval...