It just gets better and more exciting as we prepare to host the first ever mountain bike race in Lenasia, south of Johannesburg as part of the #Riding4SAeducation campaign.

The MTB race and Farm Market will mark the culmination of the #Riding4SAeducation effort that will see enthusiastic and novice riders from several charities travel over 1100km in aid of learners in South Africa.

The race will take place on a picturesque farm just outside Lenasia. Riders can enter a challenging 35km event, a fast 15km ride or a 3km walk and ride for toddlers and people looking forward to an early morning stroll in the farm fresh air.

The events will be charged at R150, R100 and R50 respectively per participant. The proceeds from the campaign will be used for education and development projects around South Africa. 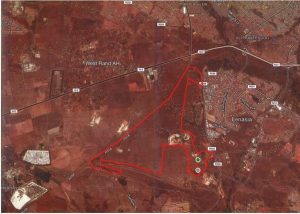 Race entries available by contacting anyone of the persons below. Simply make payment directly to them and fill out an application and indemnity form and help SA learners while enjoying an exciting outdoor challenge.

The #Riding4SAeducation 2018 campaign is aimed at supporting for learners in the country suffering from a lack of resources.

By empowering and educating our children in these early and vulnerable years of their life, we can together leave a lasting and sustainable contribution to the development of South Africa.

Our ride this year will take us along the following route: Polokwane-Mokopane-Modimolle-Bela Bela-Atteridgeville-Rustenburg-Swartruggens-Zeerust-Mahikeng-Vryburg-Lichtenburg-Klerksdorp-Potchefstroom-Lenasia.

Starting on the 11 of February 2018 in Polokwane, Salaamedia and Salaam Foundation participants will be joined by riders from the Africa Muslims Agency, Nyota Collections, Al Ihya Foundation and Islamic Relief South Africa.

Last year Salaamedia and Salaam Foundation ran a successful inaugural #Riding4SAeducation campaign. Travelling across the length and breadth of South Africa, close to 1000 pairs of school shoes, 2500 stationery packs, school uniforms, hundreds of reusable sanitary pads and even a Computer Lab sponsored by the Jamiatul Ulama South Africa reached the most deserving learners.

Donations to this important South African project can be made to:

For more information on this campaign you can email info@salaamedia.com

6000 Postcards of #LoveHopeCare to suffering children

Why do we protest?

Inside a females only Islamic higher learning centre