From the Airport Runway onto the humid bustling streets of Cox’s Bazar I was in awe by the sheer number of people walking the streets of Bangladesh. The tuc-tuc in which we rode to our hotel fitted a driver, our luggage and the Salaam Foundation team, 3 in number. Informal housing, unfinished buildings and small shops lined either side of the narrow roads, shared with cars, busses and cows. The sound of every vehicle hooting is something that I soon got used to as a background buzz wherever we were. Everything is tight in Bangladesh, a country with 163 million people, 2.9 million of which live in Cox’s Bazar.

A year earlier on the 25 August 2017, the Rohingya crises escalated when the Myanmar military accused Rohingya rebels of launching attacks on police and military points in the Rakhine state. The military responded in a grotesque manner, resulting in a mass persecution of the Rohingya people.

Village by village as survivors have testified to the army came, called out all the men, terrorised and violated the women and children and opened fire on them. As they ran, their homes were set alight, many thrown into blazing fires.

For some, this meant jumping into rivers and swimming across for survival. Slain bodies of Rohingya children have washed up onto Bangladesh shores which shows the extreme measures that the Myanmar Army have taken against the Rohingya. This latest tragedy compounding the reality that the Rohingya are the world’s most persecuted minority since the late 1940’s.

The hype around the Rohingya people has dimmed since the initial flurry of news last year. But the story has not ended as they are still in desperate need of the world’s assistance.

On route to the camps we stopped at a safe home. These are centres which see to the psycho-social needs of women who have faced gruelling conditions. No men are allowed to enter these homes.  Inside, I met 18-year-old Jannatul Firdous. She had a 1 month old baby named Anwar and was ready speak to me about her experiences in Myanmar and how she came across to Bangladesh. My visit was cut short by a phone call that prevented me from interviewing the survivors. This particular home had taken a strict stance towards protecting the anonymity of the women as well as their stories.  Disappointed I had to leave. 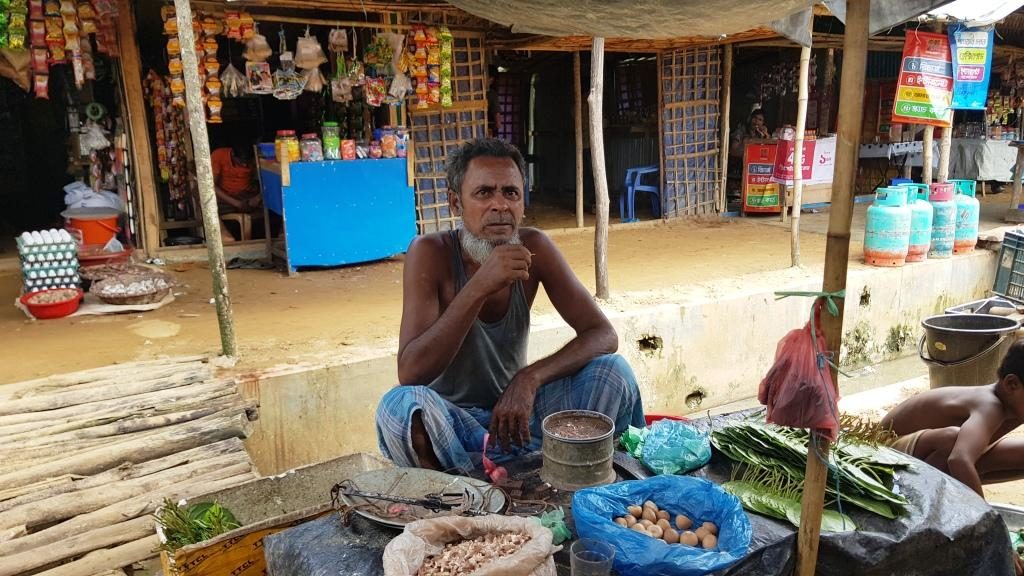 The Rohingya are struggling to bring back a sense of normality. Image: Salaamedia

We then went to Kutaupolong camp, in an area called Ukhia close to the border between Bangladesh and Myanmar.  This is the largest of all the Rohingya refugee camps and houses about 600 000 people.

Here I visited another safe shelter, a space for women and children. I went inside hoping to interact with the survivors of the brutal Rohingya genocide. Lutfa Bakhsi, a counsellor that works at this shelter spoke to me about what they do. She used the term, “mind satisfaction,” to describe the service they offer. She said they help the women and children to take their minds off the horrors of their past.  Inside, a classroom of young girls welcomed me. I sat chatting about their lives.  Senuwara, lived with her mum and 5 sisters in the camp. Her dad was killed by the soldiers. Rafiqa, a 10-year-old girl said that if the soldiers saw any beautiful woman, they would rape her. Shocked by what she had just said to me, I asked her how she knew this, and her reply was, “I know, because I saw it”.

The frank manner in which they spoke about the horror and violence that they witnessed touched a chord deep inside me. At that moment, while these girls spoke, my thoughts shifted to my similar aged daughters that I had left at home in South Africa. A piece of my heart would always remain in the safe space I visited that day.

Curious to find out what the camp houses were like, we visited some homes. Rahima Begum was one of the ladies that spoke to me. She said the military came to their homes and told them that they cannot live in Myanmar. “They called out all the men and opened fire on them while setting their homes alight.”All of this happened right before her as she escaped in the early days of the genocide.  Bangladesh had not yet opened their borders, so she spent a week in a river in no man’s land between the two countries. To survive she was forced to eat leaves from the trees.

I always knew that the situation these people faced was grim and bleak but hearing it from them made me tremble. Each one had a horror story, worse than the previous one.

Sitting in a smoke-filled bamboo hut, Aashie shared her experience, “The army raped my sisters, they raped our daughters they killed our parents, and all of this happened in front of me. To save myself, I jumped into the river and in this I lost my own child.” Tears ran down my sweaty cheeks as I walked out trying to compose myself to do one more interview.

ShazedaBeghum said that the torture was too much. Her brother and aunt were burnt to death and she spent Eid ulAdha last year in the river as well as she tried to flee and was denied entry at that time.

Bangladesh has since relaxed their border controls and welcomed over one million Rohingya into their territory.

As I walked out of the Kutupolong camp that day, I felt helpless, powerless and defeated. The thought of a food distribution the next day lightened my emotional burden.

Unchiprang camp in Teknaf, Southern Bangladesh was our destination for the next day. The Al Qamar medical centre run by a young Bangladesh scholar, Moulana Yusuf, treated approximately 300 patients daily. Medical services are provided free of charge. Here, patients can see a doctor for treatment and minor procedures. Circumcisions, quite an important need for the predominantly Muslim Rohingya, are also carried out here.

Moulana Yusuf also runs a madressah for the Rohingya children to learn their basic Islamic beliefs. In his classrooms across the camp he teaches 5000 children on a daily basis.

The process of handing out parcels was managed by the Bangladesh army stationed at that camp. Captain Faheem, well versed in English and extremely jolly, marshalled the troops who assisted with maintaining order.

The ferociousness with which the children queued and fought to get a meal, spoke to the severity of their hunger and need. The sight of a two-year-old child, scantily clothed, who could barely hold the food parcel gave a new meaning to what gratitude truly means.

Over 1000 children were fed at this distribution. Their life reality played out before me.

We often ask what we can do to help refugees. Well, when people run away with nothing in their hands, they need every little thing.  From medicines to clothes, shelter to emotional support, they need it all.  Sometimes it’s just a hot nutritious meal that makes all the difference.

Back in Cox’s Bazar we visited the public hospital. An overcrowded building of patients. A shortage of beds forced medical staff to see to patients who lie down on the floors of the wards. Passages and corridors of the hospital were also filled with patients, all desperate for assistance. Bangladesh is country that has many living below the bread line and the influx of the Rohingya people, bring with it xenophobic and economic challenges. International aid is thus vital to the sustainability of this country in helping the many Rohingya that they have accommodated in their country.

Throughout the Salaam Foundation #Survivor campaign, we focused on helping with the psycho-social needs of the Rohingya.  It was disturbing to see so many children who had very little to wear while many ran around the camps wearing absolutely nothing.  The Islamic dress of the Rohingya women stood out as a reminder that these ladies want to guard their modesty, many of whom, wore a face veil. Keeping this in mind a clothing distribution was facilitated by Pulse Bangladesh, a partner organisation.

Humanitarian journalism is all about reporting on the story and then getting involved and doing something about it. It’s almost impossible to visit a place like the Rohingya refugee camps in Bangladesh and not do something about it. We report on issues globally and locally and then try our best to provide aid to those in need. We call on you to help the many in need by donating to Salaam Foundation.

Will Iran be able to match its revenge...

All is being done to bring Shiraaz home...

Yazeed Kamaldien: Hajj from a lens of a...

42nd Annual International Day of Solidarity with the...

Legal steps to be taken after Israel’s WBG...

Part 7 – The Rohingya Diary with Yvonne...

Do you know what Rafah means to me?