Top Posts
“Travel Through the Earth, So That Their Minds...
Kids and their ego driven fight club
Israel destroys another Palestinian school, this time in...
Progressivism: What happens when woke culture takes it...
Hypocrisy in Western criticism of Qatar World Cup
State of South African Football on the International...
Janusz Walus destroyed a nation when he murdered...
Jannah Training: Training Children in the Mould of...
Bags of Love helping one community at a...
Winner of Le Cop Sportif competition to design...
Home Featured Seventy-four years on, Al-Nakba continues
Featured 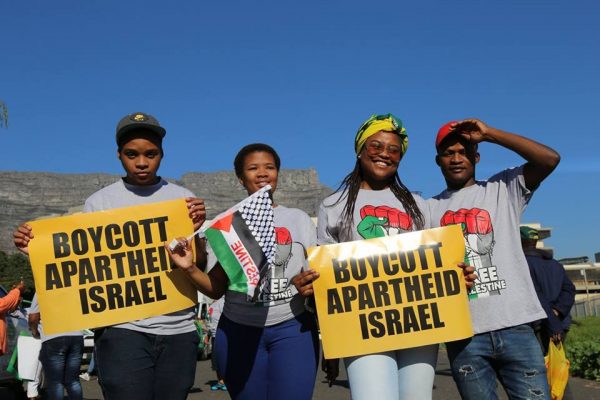 Palestine – Every year on the 15 May, Palestinians remember Al-Nakba which translates to “The Catastrophe”. It is the day which saw more than 700 000 Palestinians expelled from their homes and land. While that mass exodus occurred seventy-four years ago, Al-Nakba still continues today.

Since the Al-Nakba Israel has continued to expand and take over Palestinian lands. Mahmoud Nawaja, General Coordinator of the Palestinian National Boycott, Divestment and Sanctions Committee (BDS), explained that Al-Nakba is still ongoing because the occupation has not stopped.

“The Nakba is an ongoing event from 1948 until now because Israel’s colonial violence and aggression have never stopped but neither has our resistance against that oppression. Now it’s happening in Masafer Yatta after they announced that they are going to ethnic cleanse all the population in that area which is a really huge area. We are talking about eight villages. They want to make the whole area a military zone. We stand united against the ongoing ethnic cleansing.”

Village after village is being destroyed to make way for Israeli settlements. Usually, these villages are taken by Israel because they either are in a strategic position or have natural resources, said Nwaja. These lands are typically taken over first. The aggression shown by Israel has only grown worse over the years as they seek to expand their land.

The only hope Nawaja has is getting the international community on their side in the hopes that they can force Israel to stop their advances.

“We call on governments to impose lawful and targeted sanctions on Israel. For the United Nations to launch an investigation into Israel Apartheid and the escalation of the BDS (Boycott, Divestment and Sanctions) campaign globally in order to isolate Apartheid Israel until we attain freedom. We need sanctions against Israel.”

Nawaja believes the Western countries have shown their hypocrisy by placing sanctions on Russia for invading Ukraine but turning a blind eye to Israel. Not only have they not placed sanctions on them, but they have also continued to support Israel by offering them military aid.

“We iterate our call for a meaningful solidarity with Palestinians facing ethnic cleansing, massacres, colonial disposition, and Apartheid. We are calling the world to stop their hypocrisy and to stand with the oppressed Palestinians. This is mainly a call for people of conscience and countries that are supporting Palestinian struggles. We are not waiting for the Western hypocrites to stand with us because they will stay deeply complicit with Israel until we pressure them.”

Shireen Abu Akleh murder was a message from the Israeli government

The life of a teacher in The Gaza Strip

Aya Al-Ghazzawi, an English teacher in Gaza, describes Al-Nakba as a day that Israelis celebrate as independence day while Palestinians mourn the events that occurred. She is a refugee living in the open-air prison, Gaza. The Gaza Strip is under strict lockdown by Israelis which restricts Palestinian movement.

“Gaza has several crossings. Six of these crossings are controlled entirely by Israel while the seventh one is controlled by the Egyptian authorities. Palestinians in Gaza cannot get out of Gaza or come in. They cannot visit their relatives. They cannot go to places freely as they want. Many of my students have lost their scholarships because they couldn’t leave the Gaza Strip. Even patients’ lives are endangered.”

Being a teacher in the Gaza Strip is more challenging because of extreme conditions they work under.

“Living in the Gaza Strip under this kind of siege and under these very hard life conditions makes it very difficult for us to practice our daily activities, to go to work and educate ourselves even at universities. Despite the fact that we go through a lot of hardships, and we are subjected constantly to massacres, sieges, bombings, collapse of the economy, lack of jobs and unemployment. Many of us actually suffer from psychological disorders, we suffer from anxiety, and we suffer from depression.”

Through this and more, Palestinians still resist and fight the occupation. The people of Gaza have hope that things will change. It is a hard battle Al-Ghazzawi believes is only possible due to the firm belief that as long as they keep fighting, Palestine will be free.

“Palestinians are still standing their ground because we believe in justice, freedom, equality, and dignity. That’s what we aspire to achieve in the coming years hopefully when we are still alive. We don’t wish for our children and our grandchildren to live the life we’re leading right now and what happened with our grandfathers in 1948 and 1967. Hopefully everything is going to be just fine.”

While there are many calling for a two-state solution Al-Ghazzawi wants people to stop. This solution he calls a “very racist” one as “Israel has more than 70% of Palestinian land” who are left with less than 22% of the land.

Rebuild is necessary for South African economy to improve

There are many instances in international media of Israel pushing a false narrative to build support. Kwanisai Mafa, Pan-Africanist activist and writer, is fighting to defeat the propaganda that has been spreading throughout Zimbabwe. He hosts events to dispel this myth.

“These events are meant to give a truthful picture of the nature of Israel’s Apartheid on Palestine which is, with the global Western media, distorting, misrepresenting and ignore deliberately. People here in Zimbabwe are bombarded daily by lies and myths by the Western corporate media. The media in the Western world has been sold the myths and the lies that Israel is the victim of this conflict. That it is only defending itself against terrorists. The current events in Palestine dispel and shatter this myth. Apartheid Israel is not a victim but an occupier of Palestine.”

Unfortunately fighting these myths and lies often result in people being called Anti-Semitic.

“Many of us still think that criticising Israel is interpreted as criticising Judaism. The conflicts or the clashes which are happening are not about religion. It is not between Jews and Arabs or between Islam and Christians. The conflict is about land theft and colonialism. Israel is a state built on the destruction of another state which is Palestine.”

Standing against Israel being included in the African Union

Israel recently applied to be part of the African Union. This was met with strong criticism from certain African leaders. Mafa believes those who are in favour of this are betraying Africa and its people.

“We believe that a coloniser cannot get membership in an organisation which was formed to decolonise Africa. For African leaders who are voting for Israel, we believe it’s a total betrayal of the principles and ethos of our liberation struggle. We fought against colonialism, and it would be very ironic to grant the observatory status to a coloniser.”

The murder of Shireen Abu Akleh shocked the world. Her family was not given peace to grieve for their beloved family member as Israeli police stormed their house the very same day. She was not allowed to be buried with dignity as Israeli police attacked the funeral procession, knocking Abu Akleh’s casket to the ground.

Abdul Aziz Younis, Palestinian Journalist with Al Jazeera, explained the love he had for Abu Akleh and how she influenced him growing up.

The family had a difficult time getting Abu Akleh’s body because it was moved multiple times before it was given to them. According to Younis, Israeli police forcefully opened the ambulance doors just to rip off the Palestinian flag.

For Younis, Abu Akleh’s murder brought to light the impunity that Israel has. Her job was to shine alight on the atrocities that Israel was committing and in death she did the same.

“She told one of her colleagues that this is her message to the world, ‘If I leave my house today, I know that either I will deliver the message, or something will happen to me’. On that day Shireen was the message. She delivered herself to prove to the world that this occupation has to end. We don’t just require a private investigation, we don’t want just people to feel pity for us. We are constantly being asked what are your demands as a Palestinian and we’ve been echoing that our demand for decades is freedom.”

The strength of the Palestinians will forever be their resistance to the occupation they face. Each and every one of them believe they will one day see the freedom they continue to fight for. The ultimate goal is for Al-Nakba to end. And for all those who have been displaced to be able to return home. Noor Ahmed and guests unpacked Israel’s continued illegal occupation and apartheid.